Unless you’ve got a closet like Carrie Bradshaw’s, extensive enough that you’ll never have to repeat the same outfit twice,

This concept is nothing new. This article, The Best-Kept Secrets Of The World’s Best-Dressed Women, discusses this point. A while ago, in attempt to put my French language education to use, I bought a French fashion magazine. Bravo to me! I poured over an article and was quite proud that I was able to decipher it. I imagined that the advice was coming straight from off of the pages from the streets of pink Paris. The article was all about how every French woman should own an exceptionally well tailored, high quality white blouse. To me, there was something so fitting about reading that particular piece of advice in French rather than in English. European elegance in simplicity. I could imagine the woman she described sitting at a street side cafe in Paris dressed exactly as the article described. 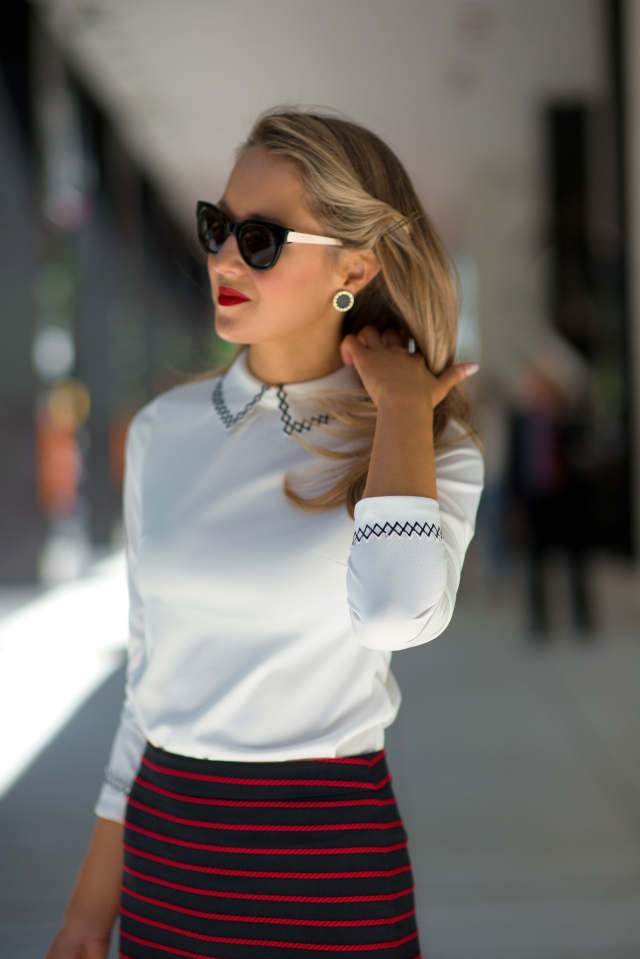 In addition to the perfect white blouse, the writer similarly insisted that every woman should own the the exact right shade of red lipstick, perfectly matched to her own complexion. All women should wear that red lipstick as an accessory to that white blouse as a kind of personal statement of simple femininity on a blank canvas.

The article explained that wearing the latest fashion trend, “Ca ne plait que d’autre femmes.” Now, I’m much more interested in the personal pleasure that fashion can bring, not in dressing simply to “catch a man’s eye” or even another woman’s eyes for that matter… Though come to think of it, there is something fun and wonderful of admiring a fellow woman who inspires me simply by seeing her looking her best…

I do believe in the classic elegance of the white blouse and red lipstick combo. These are symbols of simple but unstoppable fashion staples that will never go out of style. There’s nothing quite like the confident feeling of wearing items of true taste, tailoring and quality; an exceptional foundation piece can make you feel like a million dollars.

So what foundation items should every woman invest in?

This article suggests a longer list than I’ll prioritize here, but I do agree with the following, in alphabetical order rather than by season:

Here’s another interesting link that prioritizes the top 5 items you should invest in.

At home in Canada, Toronto fashion maven, Jeanne Beker, has preached that message by trying to sell a more mature generation of Canadian women her collection of signature clothing.

While I’m not particularly taken with Jeanne Beker’s fashion line, but I get it. Her collection, EDIT, isn’t really right for my generation. I appreciate maturity, but it feels like a woman in her 30s would be aging herself in that clothing line… like she’d be trying a bit too hard. But the concept is spot on. And it’s the same message that fashion experts and columns have always preached to us. We just often forget to listen.

Whether you’re 21 or 45, this advice holds true. I wish that I’d listened to this advice when I was emerging from University, but it’s never too late to learn.

One Reply to “Sample Ghost Blog Post: WHY EVERY WOMAN SHOULD INVEST IN QUALITY FOUNDATION PIECES FOR HER WARDROBE”